Andrea Zittel: How to Live?

Since the early 1990s, Andrea Zittel has used the arena of her day-to-day life to develop and test prototypes for living structures and situations. Using herself as a guinea pig, she constructs an understanding of the world at large using these isolated experiences. The experiments have at times been extreme—wearing a uniform for months on end, exploring limitations of living space, and living without measured time—yet one of the most important goals of this work is to illuminate how we attribute significance to chosen structures or ways of life and how arbitrary such a choice can be. Rather than deny the personal significance of these decisions, Zittel uses her work to try to comprehend broad values such as “freedom,” “security,” “authorship,” and “expertise.” Zittel is interested in how qualities, which we tend to feel are concrete and rational, are often subjective, arbitrary or even outright invented. 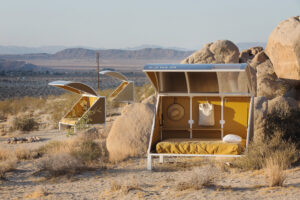 Renowned artist Andrea Zittel currently lives in Joshua Tree, Calif. After receiving her BFA from San Diego State University, and MFA from the Rhode Island School of Design, she established her practice in New York. There she founded A-Z East, a small row house in Brooklyn turned into a showroom and testing grounds for her prototypes for living. In 1998 she moved back to the west coast, eventually settling in the High Desert region next to Joshua Tree National Park where she founded A-Z West in 2000. A-Z West is the current site of her studio practice, as well as other ongoing living experiments including the Wagon Station Encampment and the Institute of Investigative Living. In 2002, Zittel cofounded High Desert Test Sits, a series of experimental art sites in the High Desert that supports works by both emerging and established artists.

Zittel’s work has been included in major group exhibitions such as the Venice Biennale, Documenta, and the Whitney Biennial. She has had solo exhibitions at the San Francisco Museum of Modern Art, the Carnegie Museum in Pittsburgh, the Whitney Museum of American Art at Altria in New York, and the Museum für Gegenwartskunst in Basel, among others. Her survey exhibition “Critical Space”traveled to the New Museum in New York, the Contemporary Arts Museum in Houston, the Albright Knox Museum in Buffalo, the Los Angeles Museum of Contemporary Art, and the Vancouver Art Gallery. Locally, you can see a permanent installation of Zittel’s Planar Pavilions at the U.S. General Services Administration’s Denver Federal Center at 6th Ave and Kipling.

Learn more about Zittel at zittel.org

We ask each of our visitors to provide a list of media and materials that are connected to the visitor’s work, interests, and inspirations.

The suggested reading list includes various reading and media recommendations provided by the visitor. This list of materials can include projects authored by the artist or others, and provides further insight into the visitor’s sources of inspiration and additional context surrounding the artist/scholar/designer’s work and practice. This list is shared with RMCAD students and faculty and is archived on the website for academic integration and research opportunities. Some physical materials from each list are archived in the RMCAD campus library and the VASD Program archive.