For the opening presentation of the Collapsing Time lecture series, David Horvitz discussed a group of works that explore time zones, longitude lines, jet lag, synchronicity, standardized time, subjective time, and other thoughts on time. Works investigated in the talk included The Distance of a Day, a simultaneous video recording by the artist and his mother of a sunset in Maldives and a sunrise in Los Angeles occurring at the exact same time. In another work, Evidence of a Time Traveler, Horvitz discussed a project in which he lived on California’s time zone while in Ireland. The lecture was presented using an “alternative minute.” 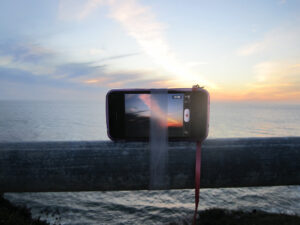 David Horvitz, The Distance of a Day, 2013, digital video, 12 min, Courtesy the Artist and ChertLüdde, Berlin

David Horvitz is an artist based in Los Angeles, California. His expansive and borderless body of work is presented through the forms of photographs, books, performances, memes, or the use of ‘mail art’ with postal dispatches. His actions often explore varying conceptions of time and space, as well as interpersonal relationships and the dissemination of images via the internet. Horvitz collects images, texts, and objects through media such as the internet, the postal system, libraries, and airport lost and found services. He then allows these findings to develop, spread, and, in the long term, get out of hand. His work has been exhibited nationally and internationally, including at Blum and Poe Gallery in Los Angeles, the New Museum, the Museum of Modern Art, and the Brooklyn Museum. He has created projects with Recess, Triple Canopy, and Rhizome (exhibited at the Tate Modern, London), among others. The artist founded Porcino Gallery in Berlin and Galerie Morille in Los Angeles.

Learn more about Horvitz at davidhorvitz.com